She’s a modern day slashie— singer, songwriter and actress Sabrina Carpenter already has three albums to her name and has opened for singer Ariana Grande. She has appeared in shows like Orange is the New Black, Law & Order: Special Victims Unit and was the lead in Disney show Girl Meets World. Here I sit down with Sabrina to chat about her new single, having Beyonce as a fan and how she gets through a crazy touring schedule.

I’m here promoting my new single, “Almost Love,” but honestly, just being able to come and do some things before I hopefully get to tour here next year. I’m just such a fan of Australia. Whenever they ask me to come, I’m like, “Sure!”

You’ve been to Australia before. What are some of your favourite things to do while you’re here?

Eat Tim Tams. Eat more kinds of Tim Tams…No honestly, I’ve been able to do a lot of the things that I wanted to do over time of coming here, like going to the zoo and going to the beaches. We went to Bondi Beach. It’s just beautiful. The people are my favourite part. Everyone’s got such a nice energy.

Tell me about your single, “Almost Love.”

I wrote the song with Stargate, and, honestly, it was kind of inspired by these events where you feel like you’re on the cusp of something really great, a new possible, whether it’s a relationship or not, it’s that really exciting feeling, where you just want it to speed up and happen quicker. I actually had the words to the song in my phone for a couple of years. And it was one of those things that when I got into the studio, it was the right day to write the song, and now it’s the first single off the album. It depends, it’s different every time. Sometimes it’s very quick and very easy, and other times, I will break down the song and write it over the course of three months. So, it’s never quite the same. I’d like to believe that every song that I write ties into my life somehow, because that’s the best way that I can write, where I feel like I’m getting something out of it, you know? I don’t think I ever to write to just write.

Tell me a little bit about the album.

It’s called “Singular,” and I really just wanted to embody the feeling and sound of this confident, empowered version of myself, that I feel like I’ve always sort of been since I was little, but I think that I had to learn to really be that way as a young woman in this industry. There’s so many doors slammed in your face, and there’s also so many fears that you have to overcome in order to have people listen to you, and understand what you’re saying and where you’re coming from. So, it’s been such a journey, and I think that was one of the reasons why I called it “Singular,” but now, at this point, sonically, it’s such a departure from everything I’ve done before. So, I’m really excited for my fans to hear it.

What would you tell your younger self, considering you would have learned so much over the years?

I would tell my younger self, like, stop with the pink and sparkles! Like, I wore way too much pink, it was a problem, when I was like, 10. But, I would say trust your instincts, because I think that that’s a huge thing that I’m still learning. I’m still learning how to put my own opinions before other people’s, because it’s so easy to be, “Oh, well, maybe they know what’s best.” But then, at the end of the day, it wouldn’t be your choice. You’re immersed in singing and film. Out of the two genres, what do you gravitate more to?

I put it this way, music is my own voice, music is my stories and I have complete control. And with acting, I get to tell other people’s stories, and I get to put myself in someone else’s shoes, and I really, really get to feel what they’re feeling, and hopefully contribute something else to this world in a way that I can’t do with my music. So I love both.

Always singing. Like, literally never shut up. Acting, I didn’t really know what it was, but I loved to play with Barbies and give them their own lives, and I loved to do different plays with my friends, and just pretend. I lived in an area where there wasn’t a whole lot around. It was like in the middle of the woods, so I had to build a world around me in my imagination, and I think that that really, really helped me now.

I think in acting it was obviously a television show that I did when I was 13 years old called “Girl Meets World.” I think that was a big moment, just because that show reached a lot of people. And I think in my music, I’d like to believe I haven’t had it yet. Because I think that I’m still at the beginning of everything, I’ve accomplished so many insane things so far in such a short period of time with music, that I didn’t think I would get to such as being able to travel to places all over the world and write three albums by the time I was 19. And that in itself, I think, is a big thing. But, I don’t think there’s one specific thing. What about your biggest pinch-me moment?

Biggest pinch me moment? Mm, when Beyonce knew who I was!

Who do you look up to in the industry?

I look up, obviously, to Beyonce. I love Rihanna. I love her sense of ‘I don’t care’ attitude, but in a great way. You know I think we need more of that. I think those are two really, really strong female musicians that have always made me feel like I can do anything on a stage, and I think that that’s a great inspiration to have in this industry. It can be scary. But I have so many. I grew up loving Christina Aguilera. She was one of my first. What’s the best thing and the worst thing about being in the spotlight?

I think the best thing is that you have an opportunity to speak to a really large audience and hopefully contribute to some of the growth in the world in a positive way, however you choose to.

The worst thing is probably that your little mistakes are magnified so much, and especially as a teenager, I mess up every five minutes, and you know, back in the day without social media or anything like that, you didn’t know. So you just have to handle it different, and you also have to, I guess, learn how to not care, but just not take it to heart so much.

What’s your number one beauty tip?

Wash your face. It’s very simple, but it works every time. No, I constantly have to work with my skin, because I’m always on the road. I mean, it’s easy to say drink water, but at the same time, I think it really is just listening to your skin, because your skin is different from everybody else’s, so it’s just doing what works best for you. 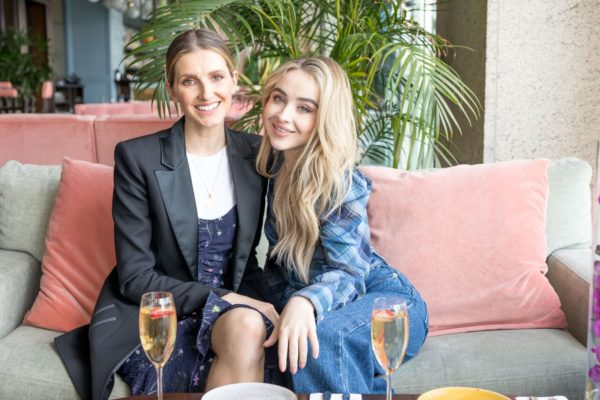 I’m releasing the album later this year, and I’m a part of a movie coming out, I think for you guys on New Year’s Day, but it’s called “The Hate You Give.” Then I filmed another movie that will be coming out next year, and touring.

I do. I think you have to be twisted to like touring, so I think I’m really weird. It’s very challenging, and I think that I’ve probably developed most of my anxiety from being on the road, but I think that when you come out of it, you’re just a lot stronger. And it sounds like it’s not that big of a deal, but when you’re constantly waking up in a new city every day you’re not really like stationary for too long at all.

How do you get through it?

You need to sleep whenever you can. I’m always taking juice shots on the road, like, lemon and ginger and cayenne, because it’ll keep me healthy as long as I possibly can be. And then I like to explore if I have time. I like to see the cities that I’m in because I’m there, you know?

If you could collaborate with someone, who would it be?

Wow. I would love to either write a song or do a song with Paul McCartney, because he’s amazing. And I’ve also always wanted to do a musical.

Have you? That’d be great.

Yeah, because I’ve never really gotten to blend the worlds together, and I think that that would be really hard, and I want to do it.

No. Actually, I’d love to do an original. I love so many different musicals. So I would, I’m sure, if one came along that had a role for me. There’s not a lot for girls my age. But, if there was like an original one, I think that would be really cool.

WE WENT TO: Hacienda Bar Sydney at the Pullman Quay