Oscar-winner Catherine Martin is enjoying the success of The Great Gatsby, for which she was the production and costume designer. I caught up with her to talk about the film, working with her husband, director Baz Luhrmann, and her love of home renovation shows.

Congratulations on your film becoming a worldwide hit.

Thank you. It’s really great for the piece to have found an audience because Baz really cares about the audience. He wants to connect with them and tell them a story that he is very passionate and interested in, so it’s fantastic that people are enjoying it.

Do you get nervous before one of your films is released?

Oh, so nervous! Incredibly stomach-churning nervous because you want to have the ability to make another movie and part of the guarantee of that is to make sure that it has success at the box office.

You and Baz are so creative and dream so big. How do you follow the same vision?

Well, ultimately you have to serve the director’s vision, so Baz is the boss! I am very happy with that scenario, so I’m lucky that I have the ability to go on the journey with him. That’s not to say we don’t disagree sometimes and that I’m not a genuine collaborator with him. I certainly have my opinion; it’s not like I walk around going, ”Yes, Baz, three bags full, Baz!” I’m sure he wishes that I were a little more like that [laughs]. He always says, ”You always play that you’re not the dragon lady but you sure have an opinion.”

What do you do to relax when you’re not working?

I’m half-French so I try to go every European summer and spend a month in Paris, and Baz says I play out my fantasy of being a housewife, which involves a lot of cooking and running the dry-cleaning down to the corner shop and things like that. He says I’m like Marie Antoinette, pretending to be a shepherdess. But then my real secret guilty pleasure is home renovation shows. My husband goes, ”Why are you watching that?” I find it incredibly relaxing. I also like Antiques Roadshow and [Baz] goes, ”Oh no!” but I really enjoy it. I’m really boring. Do you and Baz discuss work at home or do you try to keep it separate?

We talk about work all the time but we have worked together for such a long time that we understand our expectations of each other of what someone can deliver in terms of energy. For instance, after a day of press it’s really hard to go, ”Sweetheart, let’s go and have a romantic dinner waterside,” when all you want to do, in my case, is watch Antiques Roadshow and he will be wanting to watch a documentary on the Second World War. I think that is the blessing of being in someone else’s life for such a long period of time – you share a common story so you are pretty clear about what your expectations are of the other person. So yes, we do talk about work at home, but the kids give us a hard time if we do it too much.

How does the whole design process start for you?

It’s very much by director, by Baz’s approach, and it will always start with the source material, so in this case [Gatsby] it starts with the book and really analysing the book and what the author is trying to say, finding any descriptions of what things are meant to look like. And then you set off on a process of discovery through research and trying to match up what the book is saying with documentary evidence. Gatsby wears a pink suit so you go, ”Were there any pink suits in 1922? Who made them? Did Brooks Brothers make them?” Through that process you discover things that are different to your first assumptions or confirm your first thoughts.

They have been a lot on this particular journey with Great Gatsby and collaborating with Prada and Tiffany’s. One was when I was sent the artwork for the windows of the exhibition that was being done for the Prada Broadway store. Across the windows it said: ”Catherine Martin, Miuccia Prada dress Gatsby,” and I just went, ”Wow.” And then I got a little tear in my eye when I was in front of the Tiffany’s windows [looking at the collection] and I just thought, ”A girl from Lindfield on Fifth Avenue in the Tiffany’s windows, wow.” Also, my nine-year-old daughter is an avid fan of Katy Perry and I was able to introduce her to Katy Perry! That made me feel pretty special; it was another highlight.

WE WENT TO The Dining Room at the Park Hyatt, The Rocks.

WE ATE High tea, scones with jam and cream.

WE DRANK English breakfast tea and a cappuccino. 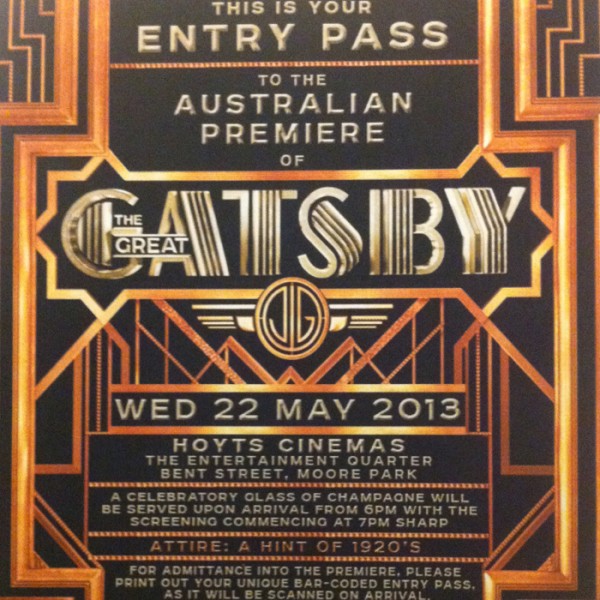 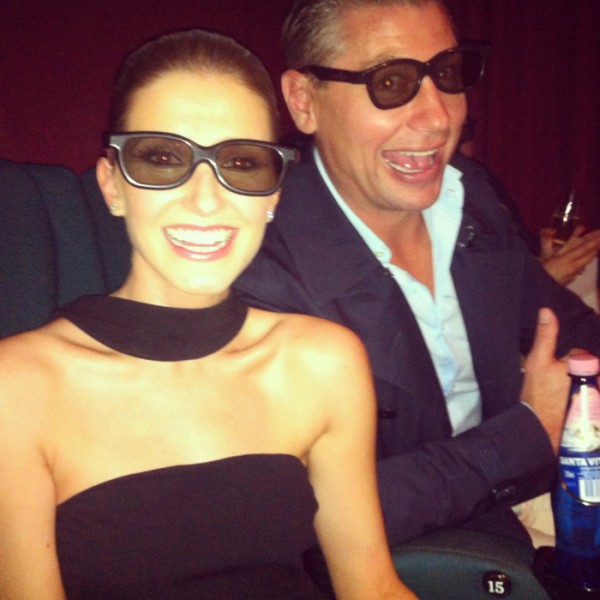 Luke and I at the Great Gatsby premiere with our 3D glasses on! Tobey Maguire giving a speech at the Great Gatsby premiere with Carey Mulligan and Elizabeth Debicki. Fresh fruit and flowers at the Balmoral Boatshed. Luke and I at the David Jones 175th Birthday. 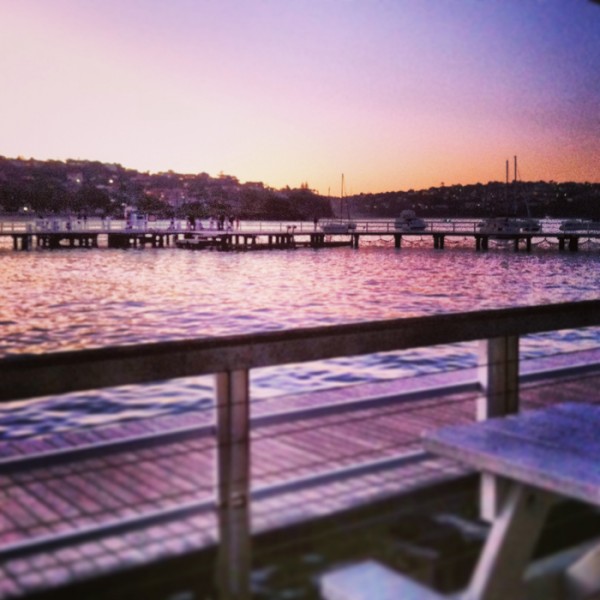 I’m getting into The Great Gatsby spirit and I’m very excited about attending the Australian premiere tonight! Here is an interview I recently did with Joel Edgerton where he talks about the highly anticipated film…

Actor Joel Edgerton is best known for his roles in Star Wars: Episode II and Episode III, Animal Kingdom and Warrior. The 38-year-old also stars as Tom Buchanan in the film adaptation of The Great Gatsby. I caught up up with the award-winning actor to talk about his career, fame and his Great Gatsby co-star Leonardo DiCaprio.

Are you excited about The Great Gatsby?

Very excited. It was an awesome experience for all sorts of reasons. It was the perfect storm for me: it was a really big movie shot in Australia with [director] Baz Luhrmann, five minutes from where I live.

Leo is great. I mean, there are not many movie stars left any more, especially of the younger generation, and it was really great to walk on set and realise he didn’t behave like a movie star. I mean, he understood his place in the machine but there wasn’t an arrogance or entitlement. I found him to be incredibly grounded and really focused.

Did he have girls chasing him everywhere?

Yes, they were chasing. Funnily enough, the Indian film actor Amitabh [Bachchan, also in The Great Gatsby] is the biggest star in the world [in terms of audience] and girls used to rock up and see Leo but when Amitabh was in town he attracted three times the girls.

He’s fantastic. He’s kind of an all-round good guy: he is good at his job, he is a great director, he is good with people, he dreams big – which is rare in Australia because we keep filmmaking pretty small. Baz is someone who dreams for the stars and reaches them, and I think the film will be very special.

You keep a low profile but are so successful overseas.

I’m just not young and attractive enough for people to get into a flip about [laughs]. I think the way to invite unwanted attention to yourself is to go and date actresses and turn up to the opening of an envelope. I like to keep it pretty quiet and keep my head down and just work.

But you are always rumoured to be dating famous actresses.

You were rumoured to be dating Isabel Lucas.

I don’t know [about that]. I do know one thing: it’s best not to read the internet.

Do you watch your movies?

Yes, I probably watch each movie twice and the second time I can be a bit more objective about it and appreciate it more for its filmmaking aspects.

Do you ever look at your old work and think, ”That’s so embarrassing”?

Yes, I look at my current work and think that! Everything is a learning process: any time you fall over, it’s just teaching you to stand up the next time. You have to take all that in your stride and you can cringe but it’s funny.

What is the main difference between working on a film such as Fighting Fear and a big Hollywood blockbuster?

Well, it’s a short time spent in a studio. The narrator of a documentary often comes in at the last minute and takes some of the glory they don’t deserve.

Warrior was definitely one of the more challenging things I’ve ever done and one of the films I’m most proud of. But, on a local front, making The Square with my brother [Nash] was such a great thing for us because we created it [together] and it was one of the first grown-up filmmaking processes we had been through together.

Do you ever do any of the martial arts moves you learnt in Warrior?

No, unless I end up in a skirmish with someone’s kids who decide they can have a go at [my character] Brendan Conlon. It’s interesting when you’re in a fight movie because people always tell you that one day someone will come up to you on the street and beat the crap out of you. I can only hope they will attack me in the exact way my character was attacked in the movie and then I might have some memory of it and I might be able to choke them out.

In jail or in the ground. Or maybe living in Bali and still making movies.

WE WENT TO Bar Coluzzi, Darlinghurst.

WE DRANK a cappuccino and a latte.