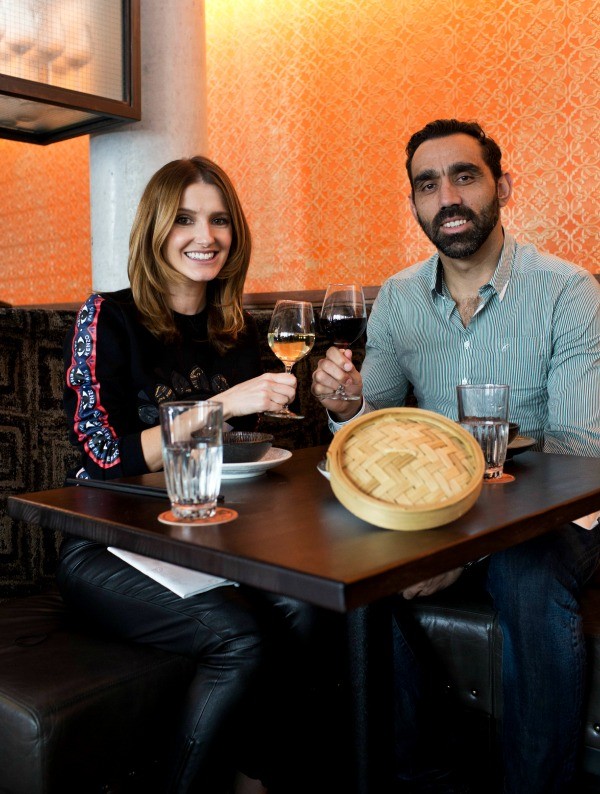 Sydney Swans star Adam Goodes is more than just a great footballer. His stance against racism and his competitive style of play have put him in the headlines. Even Shane Warne and Michael Clarke recently bought into the debate. But with the Swans favoured to win this year’s AFL Premiership, and having been named Australian of the Year in January for his community work through the Go Foundation and advocacy against racism, this could be Goodes’ finest year to date. I caught up with the 34-year old.

Will you continue to play for the Swans for another year?

I’m just weighing up my options at the moment. Footy has been such a massive important role in my life. I’ve been with Swans now for 17 years, since I was a kid. I really can’t see myself doing anything else, but I do have to start to think about what’s next for me.

What will you do after football?

I think I’d like to take a couple of years to really decide what I want to do. I’m in a lucky position financially to do that. So I can really take my time and maybe travel the world.

What is your biggest career highlight so far?

It would definitely have to be to win the premiership in ’05 because it was the first Sydney team in the AFL to ever do so and it was our first the Sydney Swans South Melbourne for 72 years, so that was a massive milestone.

What does being Australian of the Year mean to you?

It’s quite a humbling experience because you’re getting recognised for your community work and your passion in wanting to see things improve in your community … It’s so nice because people might just know me as a footballer, but now people really get an insight to the things that I do outside of football, which is really nice because I’d hate for people to define me as, “Oh, Adam Goodes was a great footballer” when I die. Hopefully they can reflect on other things that I was able to do for other people and things outside of football.

You’ve been very vocal in your stance against racism. Have you seen improvements in the sport?

Definitely there’s improvements, but what I have seen also is the amount of people who are more willing to stand up and fight it. We are seeing a lot more instances of people standing up and saying “No” and a lot more people asking for help on, “How do I deal with this racism?” The amount of emails, feedback that I am getting from a lot of people is, “We need help. How do we deal with this issue?” And for me, to be able to then steer them in the right direction to get that support and help means that there is going to be outcomes for those children, for those parents, for those communities where this is happening. And that to me is how you create change. You have to build the awareness. Then you have to give the people the support and then you have to deal with actions and consequences while going forward.

Have you seen a big improvement in awareness and people making a change?

Yeah, definitely. I think just the people being more aware of what is acceptable and what’s not acceptable. That to me is a really big thing. I think we’ve all been at barbecues with friends where somebody says something that’s just a bit off, whether they’re joking about a different religion or different nationality or what different people eat; you just feel that it’s a bit off. Now we can pull our friends aside one-on-one and say, “Mate, what you said there is a bit unacceptable. I prefer you didn’t say that when you’re around me because I find it a little bit offensive.” Those conversations are starting to happen and that’s how you create change, because until you have those conversations, people are going to think it’s funny and acceptable to act like that.

As a professional athlete, do you feel a responsibility to be a role model to the younger generation?

I definitely don’t feel the responsibility to do it, because I don’t think every sportsperson or person that’s on TV should be a role model for our people. But if you choose to be a role model, then you should make sure that you are sending out the right messages for those kids to want to support you and follow you and to give them someone to really look up to. Because if you’re going to be a good, positive role model then you have to live and breathe it and you have to make the right choices so that they can then make the right choices.

Have you decided to be a role model and do you make choices to represent that?

Yeah, definitely. But I think the biggest lesson for me is that I’m not saying to people “I’m perfect” because I’m far from it. But when I make mistakes, I learn from them, and that’s the big difference.

You are always well dressed. Are you interested in fashion?

Tell me about your involvement with Brando shoes.

Brando, it’s their 25th anniversary this year, which is a huge milestone for them, and it’s nice to support them. It was a perfect fit for me. I like to go to nice places and wear nice dress shoes. I’ve actually got quite a big foot, so to get these shoes specially made in Italy, just for Australia, it’s just a great fit for me.

It’s the first time in my life where I haven’t had a five-year plan that had football involved in it. So I’m really excited by it. I think in five years’ time I’d love to have a couple of children, be married and living in a house somewhere here in Sydney.

I love to do puzzles, it relaxes me.  At the start of every season I start a 2000-piece puzzle and whoever comes over to my home has to contribute at least one piece to the puzzle!