Catching up with Samantha Jade at Sydney’s China Doll

From winning The X-Factor in 2012 to a stint on Home and Away, playing Kylie Minogue in the television mini-series INXS: Never Tear Us Apart and touring with One Direction, Samantha Jade certainly knows how to excel in multiple artistic endeavours. Having already released two albums, Samantha Jade and Nine, the singer, songwriter and actress’s third record titled Best of My Love has just dropped. An album filled with disco anthems, Samantha Jade says it’s a “tribute to amazing, powerful women who in the disco era became really comfortable with their sexuality”. Here she chats to me about writing songs, dealing with crazy rumours and the strangest thing she’s ever read about herself.

It’s funny with music because you make the record and you’re behind the scenes completely [in the]. studio and you’re writing. You don’t have to think about anything because you’re just in this emotional place. So now I’m in that zone of promoting and publicity and performing and actually learning the words properly, learning how to sing it, and learning choreography. So it’s really fun.

Tell me about your new album.

It’s my third album, which is pretty cool to say that I made it to three. The first one obviously was X-Factor, and it was a bit of a postcard from the show. And then the second one I wrote every song, and it was really deep and about my mum [who passed away]. And then this one now is fun. It’s all disco classics that we’ve remade. It’s a bit of a tribute to amazing, powerful women who in the disco era, became really comfortable with their sexuality and being a solo female artist.

So the album’s called Best of My Love. Where did the name come from?

So basically, Best of My Love is that song, “Got the best of my love,” which I’ve always loved. You see it in so many movies and a lot of people have remade it. There are so many disco love songs so you have to pick and choose and that one was my favourite. And to me, it’s the sentiment of the record. You know, giving you the best of my love and being happy.

What a fun album! So what’s a typical day for you?

Lately it’s been insane. We are finishing up all the things with the record, all the ads that we’ve done for TV, and we’re making music videos and obviously all the promo going along with it. A typical day is probably flying in or flying out, and then going straight to rehearsals…along with other side projects that we have going on.

What is the best part about what you do?

I think the travelling is amazing. I get to see the world, which is so great. It’s never for a long time…but I try and extend a little so I can see a bit [of the place I’m visiting]. And meeting great people. Even the ladies I’ve just been working with, Kate Ceberano and the Veronicas and Dami [Im] and Amy Shark and so many great people that I get to talk to about music.

What’s the worst part about what you have to do?

It’s very rare to have time off. I think the weird hours too. If you are writing a song you can be there for like three days and haven’t gotten it yet, so you stay there trying to get it. Especially with choreography, that is hours and hours of time. My family are in Perth, so it’s hard not seeing them.

Do you get a feeling when you know you’ve got the song right?

Yes, there’s a feeling. When we wrote “Firestarter,” which is one of my songs from ages ago, we wrote it, and we knew. And we wrote that in like an hour so it was a pretty fast one which is really rare.

Really? That is amazing. What is the process when you’re writing a song?

If you had never gone down this career path, what would you be doing?

I love doing make up, so I have a make-up range and I would probably do something [with makeup]. But then I love children, so I would probably love to teach music or singing, maybe have my own little singing school.

Seeing as you have a love of makeup, what are your top beauty products that we need to know about?

Well, I think it’s really important to have a good moisturiser. I think that is something people forget. What do you use?

It’s a French moisturiser [I found] when I was in Paris and I was obsessed with it. It’s Embryolisse and they’ve got a mattifying one and just a moisturising one. On the T-zone I use the mattifying one. It’s never oily and your makeup goes on beautifully over it.

And I have actually found this amazing thing by a brand called The Ordinary. It is cheap, it is easy to get, it is called Caffeine Solution and I dab it under my eyes.

What is your number one fashion tip?

My mum gave me this advice and she used to say that Coco Chanel said, “Always take one thing off before you leave the house”. And I agree…I love simplicity.

Then what would be your wardrobe essentials?

A good black blazer. That’s my uniform for myself every day, like I can wear a T-shirt, with a blazer and blue jeans. But a good blazer that fits on the arms, I think. Those big baggy ones I am not into. And a really good pair of jeans. A good pair of high waisted jeans. Never ever go with straight.

Where is your number one holiday destination?

Well it’s changed, ’cause I just did the whole Europe thing last year and I went to Santorini, and I loved it. I always suggest to stay at Sand de le Hierarch. It is known as crazy. Also I just love the Amalfi Coast. It is so beautiful.

Do you enjoy life in the spotlight?

I do and I don’t. I mean, it’s always hard to read things about yourself that aren’t true and not you have to defend yourself, but at the same time, I have learned to deal with that. If my dad is happy with me, and my brothers, and my important people then I’m doing OK.

What’s the funniest thing you have ever read about yourself?

Oh gosh, I read something about hair from a fan that I keep. That was funny, and then that I was dating Niall from One Direction, for like a year, on and off. 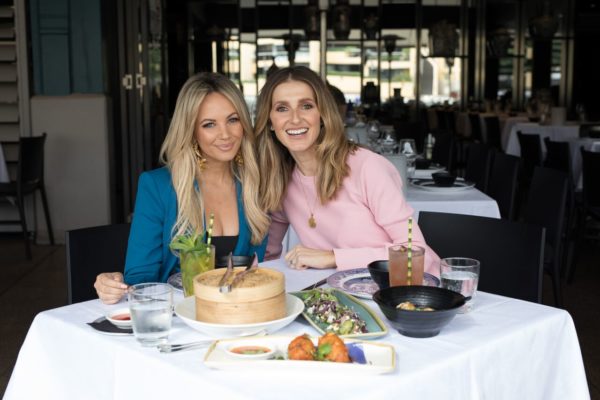 How did they get that?

Well, only ’cause I knew him, but I knew him because we did a tour together, and his cousin actually lives in Melbourne, who I know. He’s so young, he’s like my brother’s age, and I was no, god no!

You’ve been with your partner [music exec Pat Handlin] for awhile. How is it having a relationship when you’re in the spotlight?

I’m lucky, ’cause he totally gets it, and he’s totally supportive, so he’s just a dream. But it is hard, because it’s hard to see each other. I mean, he’s always working too, so we have to have date nights.

What’s the secret, do you think?

Making time, and going, “OK, we’re going to hang out now and not have our phones”. So at dinner but we put our phones away.

I hope I have a baby. I love kids. Love them. And my best friend, Julesy, she has two babies who I am obsessed with. I hope I still work in music, because these days it’s really a big accomplishment to still be in the music industry, so I hope that I’m still here.

Winning an ARIA was a big one to be standing up there with a reward, that is voted by your peers. Probably that, and I think Nine coming out, ’cause I wrote that album for my mum, and I think that she would have, I never got to play it to her, but I did play her a lovely song while she was in hospital. So that coming out, knowing that she liked some of it.

We went to: China Doll

We drank: Cocktails – “Sympathy for the Devil” and “Mandarin & Kaffir Lime Spritz”

I WORE a Seed Top and Skirt

On the 9th of May, Head Chef Frank Shek at China Doll will head to restaurant China Lane and join Kristian Vale (Head Chef) to cook up an incredible banquet style dinner. Book here: http://www.moshtix.com.au/v2/event/china-doll-china-lane-celebrate-20-years/103346