Fashion, Shop, What I Wore

What I Wore: The Championships I love a monochrome dress code so I was excited to attend Derby Day at The Championships over the weekend as attire was all about black and white.

I went for a classic look for the day having found the ideal houndstooth print mini dress by Balmain to wear on the day. I loved being able to work a little old school glamour into my outfit via the dress but wanted to still maintain a modern feel with my accessories.

When it comes to monochrome I think gold is the ideal accent colour. So I incorporated a few gilded accessories into my look with a black and gold Victoria Novak headband and gold statement earrings by Clover accessories. I then kept things simple and sleek with black Aquazurra pumps and a dainty top handle Oroton bag.

I think there’s always something about autumn racing events that just inspire me to channel classic looks. And really how can you ever go wrong with the classics? It’s been an exciting week for my role as ATC ambassador, attending a fashion launch at Sydney’s Wisteria and also The Championships over the weekend. I love autumn racing season so it’s been great fun getting in the midst of it all. Not to mention the fashion trends are so good for all the event on the racing calendar at this time of year so it’s definitely been an exciting week as far as outfits go.

I also looked back on one of my favourite looks from my trip to Paris and also at 7 pieces that will make getting dressed 7 days a week easier (trust me—check it out to make wardrobe dramas a thing of the past.)

Hope you have a great week!

Fashion, Shop, Social, What I Wore

What I Wore: ATC Lunch As this year’s ATC ambassador, I was excited to attend the ATC Autumn Fashion Lunch at Wisteria restaurant at Sydney’s Centennial Park yesterday. The lunch showcased some of the best looks for autumn racing, with all the looks styled by official autumn racing stylist, Jess Pecoraro. I’ve worked with Jess numerous times for various occasions so I was excited to see her vision for the season.

Pink is a big trend for autumn racing so I opted for this candy coloured Alessandra Rich dress for a polished, feminine look. When working with such a colour I think it’s key to let the vibrant shade take centre stage so as far as my headwear went I decided to keep it simple with a Nerida Winter headband in a matching shade. I then opted for my pink Bulgari bag to keep things tonal then cream Christian Louboutin heels to provide a subtle pop of colour.

I really love all the looks for this particular time in the racing calendar and I’m looking forward to Day 1 of the Championships this Saturday. I can’t can’t wait to see the Derby Day fashion at the track.

Dress: Wrap dress by Alessandra Rich from Harrolds in store

Shop the look on a budget: We had a week of typical trans-seasonal weather in Sydney which meant sunshine one minute and torrential downpour the next. The upside though? The girls were able to wear these adorable raincoats whilst out and about on one of our usual walks as they inspected all the gorgeous blooms that are still on display in our neighbourhood.

I also enjoyed the bustling CBD this week debuting a new look by Camilla and Marc that ticked all my requirements for a sleek monochrome look.

And lastly I ended the week attending the Golden Slipper Stakes in Sydney in my new role as ATC ambassador but also to take on reporting duties for 7 Racing. It was great to be able to get in front of the camera again and chat all things fashion at one of my favourite racing events.

Hope you have a great week! Actor Anna Bamford is best known for her role as Miranda in the Channel Ten series Wonderland, for which she last year received a Logie Award nomination for most outstanding newcomer. Bamford made her main-stage debut alongside Cate Blanchett and Richard Roxburgh in Sydney Theatre Company’s production of the Anton Chekhov play The Present, which finished last month. I caught up with the 26-year-old to chat about stage fright, working with Blanchett, and being an ambassador of the Sydney Spring Carnival.

You recently played Maria in The Present. What was that like?

Amazing. I graduated from the Western Australian Academy of Performing Arts (WAAPA) in 2012 and it was the first stage show I’ve done – and it was with Cate Blanchett and Richard Roxburgh, which was an amazing experience.

What was it like to work alongside Cate Blanchett?

It was a dream come true. It was really strange because the week before I got to the audition I was interviewed and asked “who would you love to work with” and I said “Cate Blanchett hands down”. And then a week later my agent called and said, “You have an audition for this play with Cate in it.” I auditioned and got a call back and then the week later had the part. Working with her was one of the biggest learning experiences. It was like an acting masterclass every day because, in the rehearsals, I wasn’t on stage the whole play so I would stay at rehearsals and just watch, where normally, you would pay hundreds of dollars to go and see her perform. I don’t know if I’m ever going to be able to beat that job.

What was the biggest thing you learnt from working with someone like Cate?

Just to take risks in the rehearsal space, that was a massive learning curve – because for me, doing television, you don’t really get that much chance to have a rehearsal. You might while the cameras are setting up, but with a stage performance, we have 6½ weeks to be on the floor and to research and try new things in that environment. It was quite daunting in the start, working with people like that, but once I saw her just taking risks and trying new things, it made me go, ‘OK, it’s alright to take risks and try new things’.

Did you always want to become an actor?

No, I actually used to have really big stage fright. When I started high school, I always wanted to be an interior designer, and then I thought, I might do drama class in year 10. I found it so nerve-racking that I would make excuses to miss class. I would go to the nurse and say that I had hurt my ankle or whatever, and it wasn’t until my excuses ran out – I went to drama class and my teacher said to me, ‘you are actually good at this’ – that I thought ‘well, I actually really like it’.

Did you study acting after school?

I had a year off and I travelled and then I studied nursing for six months and then I went to WAAPA in 2010.

You have had so much success in such a short time. What was it like when you were nominated in 2014 for best newcomer?

That was an another huge experience because I had never been to the Logies before and Wonderland had only been on screen for five weeks so it was a huge change from working on set to realising that people had been watching the show and liking my work, which was really cool.

Do you prefer working in TV or theatre?

They are so different I can’t compare them. But with theatre you have instant gratification, you have the crowd laughing or applauding and you are there in the moment and you can really construct your performance while you are performing it. But in television or film, the editor is there and you are not in control of the end product. They are two completely different beasts.

What is next for you in terms of a role in TV or theatre?

I’m trying to keep my options open but I would really like to get back into television. I haven’t done that since last year … Those two years on Wonderland I learnt so much because at WAAPA there was on-screen training but it was majority stage, so on Wonderland there were so many great people and amazing actors and friends that I made that I learnt so much from.

I would love that. I haven’t done a film. That is kind of the next thing that I would really love to achieve, where a character has an arc that is for 90 minutes instead of a segment of 45 minutes on a TV show.

I would love to play the role that Charlize Theron played in Monster – something that is completely different to anything that I’ve done.

Cate Blanchett, as an actress but also as a person. She is a phenomenal, kind, loving, generous woman. And my mum: she is so strong and amazing. I also love Jennifer Lawrence, she says what she wants and is completely herself. I think in this entertainment age, it’s so based on how you look and how you come across. That is really important, but to be able to be who you are and true to yourself is more important.

Acting-wise, there are few things in the works but I can’t talk about them yet. But currently I’m Australian Turf Club ambassador, so I working with them, which has been really fun. I didn’t know too much about horse racing before I started, so I found that really interesting.

What have your Australian Turf Club commitments involved?

Attending the Sydney Spring Carnival as well as judging the Myer Fashions On The Field on Moet & Chandon Spring Champion Stakes Day. I have been to the races before but it was always with friends in the general admission, so it’s been a great experience. There are [two more] big race days left during the Sydney Spring Carnival: [Derby Day Supported by ADFA Day on October 31] at Rosehill and [McGrath Estate Agents Melbourne Cup Race Day on November 3] at Randwick.

Hang out with my friends, and I have two dogs and take them to the park. My boyfriend and I have a great group of friends. We love going camping and getting out of town. And I’m learning guitar.

Do you have plans to move overseas and pursue a career in Hollywood?

Yes I’ll definitely think about it. I have a manager in LA; it’s definitely in my mind as a possibility, but I would love to continue to work in Australia. I think it’s such a beautiful place to live. LA is where it is with all that, but it’s a completely different ball game – it’s the entertainment industry times a thousand, with so many people wanting “that role”.

WE WENT TO The Chairman’s Lounge, Royal Randwick 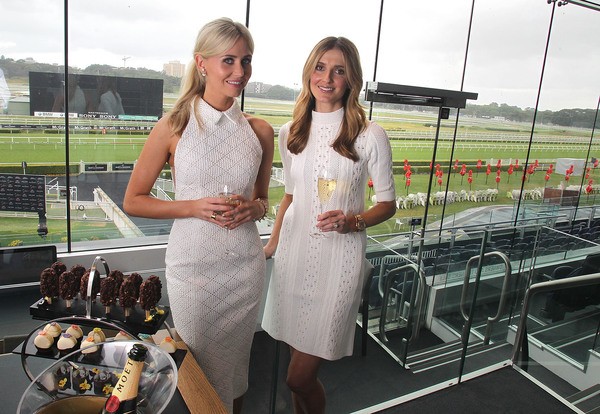 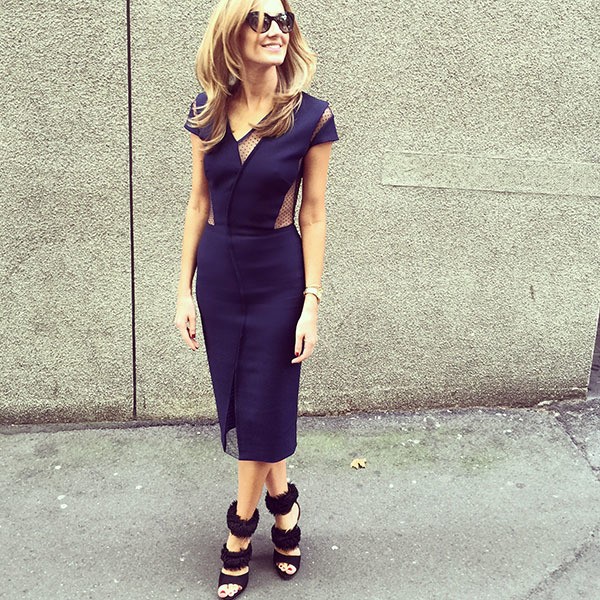 I’ve mentioned previously how much I love Victoria Beckham dresses. They’re so beautifully tailored and this dress from Belinda International is no exception. This navy dress is the perfect dress for autumn and I couldn’t wait to wear it to host the ATC Golden Slipper lunch with Nicole Richie.