The baby clothing brands I love as a mum 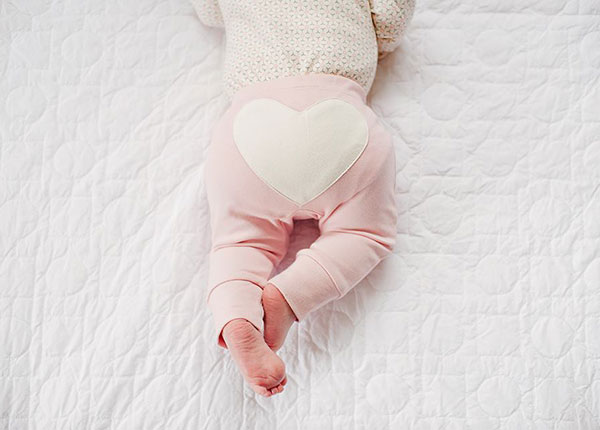 Now that I have two wardrobes to look after (mine and Sophia’s!) I’ve managed to find a few baby go-to fashion brands that I love. Much like I have my fave brands for particular styles, I have some brands that I consistently turn to when I’m pulling together outfits for Sophia. It’s often more fun to go shopping for her – the clothes are just so ridiculously cute! Here’s what’s at the top of my list:

This was featured on my list of fave online stores because not only do they do great clothes, they also do everything in organic fabrics.

I’m a big fan of buying organic clothing and Purebaby has a really great range of cute organic clothes. Often the hard part is just trying to narrow down the list of items I want to buy!

What mum doesn’t love Bonds? As far as basics go, I can’t go past this Aussie brand. Since Sophia tends to outgrow things quite quickly it’s nice to be able to grab a few key basic items at a reasonable price.

What are your fave baby brands? Is there one I should definitely add to my list? Lunch with Elyse and our daughters at Bathers Pavilion. Photo: Edwina Pickles.

Elyse Taylor traded working in a bakery for modelling and has since been a face of Estee Lauder and walked on catwalks for the likes of Dolce & Gabbana, Tommy Hilfiger and Victoria’s Secret. The 28-year-old Australian, who is based in New York, gave birth to her daughter, Lila Louise, 11 months ago and has since returned to modelling, visiting Australia as an ambassador for Bonds to mark its centenary year. She chatted to me about motherhood, the “nightmare” of getting back in shape, and why modelling was far from her mind as a youngster.

Congratulations on becoming a mother.

Thank you. It’s amazing. I mean, I’m sure you’d know. It’s challenging but it’s amazing and so much fun.

For you, what’s the best part about being a mum?

I don’t know – just getting to know her. I love when she reaches for me and says, “Mum, mum, mum”. And then at the middle of night, I’ll sneak her into my bed when we’re travelling. It’s amazing. It’s just little things that are incredible.

Did you take some time out from work when Lila was born?

Yes, I took the first five months off, just getting back into shape and spending time with her and I was breastfeeding as well. I just wanted to be with Lila and get used to everything. I wanted to spend as much time with her before I had to start travelling again because getting away is quite hard.

It must be hard being a new mum and travelling for work. How do you juggle it all?

I’ve become more selective with all my jobs. I make sure it’s worth it, and if I have to be away for more than four days then I’ll take her with me.

Thank you, I try. Lila had me up at 3am this morning! But it has been a long road. It took me six months to get back into shape. It was a nightmare.

Why was it a nightmare?

To get back into shape. I put on 20 kilos during my pregnancy and you see other models bounce back straight away but I didn’t, I had to work really hard.

How did you get back in shape?

I had to try different things because the stuff I was doing before [my pregnancy] just wasn’t working anymore. So I started training [with] Justin Gelband, who does Model Fit. And then he put me on a blood-type diet.

What does that involve?

I’m an O blood type. So for me it’s more of a meat-based diet. If I stick to that and I’m really strict about it, then I can still eat a lot and lose a lot of weight. But it took me good six months with a lot of training as well to lose the weight.

What was your fitness regime?

I worked out four days a week for 90 minutes. His workouts are a bit strange. You do weird kind of high-repetition leg weights – like a Tracy Anderson workout.

Did you feel the pressure from the modelling industry to bounce back?

Not directly. But it is there because you get replaced, and I did get replaced with certain brands I worked for. If I step out [of work] there’s a hundred other girls that can take my place. So it’s hard. I don’t feel the pressure from them directly but it’s from myself.

This trip, I came back to Australia for the Bonds 100-year anniversary campaign that I shot alongside [actor] Jai Courtney.

How did this all come about?

I’ve had a really long relationship with Bonds. I was the face of their underwear a couple of years ago. So I’ve grown up with them and we have become like a little family. So it’s nice to be able to come back and see familiar faces, especially now with Lila. She was in couple of shots. It is so nice to have her on the set.

When you were younger, did you envisage your life to be the way it is today?

No, not at all … I was working at Bakers Delight. I got fired because I used to eat all the custard scrolls and then be too sick to work [laughs].

How did you get into modelling?

My friend was modelling at the time. It just appeared to be a lot less work and more money than Bakers Delight! [laughs]. So she took me down to her agency and the rest is history.

So you had no aspiration to be a model when you were younger?

No, not really. I didn’t think about it. I was kind of just like a tomboy and was like, “Let’s go to the beach and chase boys around.”

Definitely my first cover of Vogue. That meant a lot to me. And Victoria’s Secret show is always fun and crazy. What’s it like to be a Victoria’s Secret model?

It’s amazing. For a model, you couldn’t ask for a better job. It’s just so much PR. It’s all about the girls. They really take time to make the girls a household name.

Modelling opened so many doors. Are you going to expand your career?

Yes. I’ve done acting courses at the New York Film Academy through a private tutor and I’ve auditioned for some pieces. I’d like to get into presenting and experience another side to this job. And I would like to set up my own business. I’m open to collaborations and doing my own range of products that is baby-orientated.

WE WENT TO The Bathers’ Pavilion, Balmoral Beach.

I WORE a Manning Cartell top and skirt.