One of Australia’s most successful fashion designers, Collette Dinnigan​ has been an icon of Australian fashion since the early ’90s. When she announced two years ago she was quitting it all, the industry was stunned. Since then, Dinnigan continues designing her children’s line, Enfant, as well as a lingerie collection for Target, Collette Dinnigan Wild Hearts, which launches in stores on September 24. A retrospective exhibition reflecting 25 years of her achievements, Collette Dinnigan: Unlaced, is on at Sydney’s Powerhouse Museum until August next year. Dinnigan talked to me about her lingerie designs, life after scaling back her business and why she’s been feeling busier than ever.

Tell me about your new lingerie range.

I did the Wild Hearts collection [for Target] in 2008 and then they approached me to do it again. So I thought, you know what, especially after I decided not to do Paris [and my main collection], it’s a good thing to do. It’s great because it’s so affordable and so accessible to people and still really good quality.

What can people expect to see?

The collection is pretty feminine. It’s practical lingerie, but with a very feminine aesthetic and lots of detail, fine prints and embroideries. It’s very womanly and anyone from 20 to 60 can be wearing it. You don’t feel like you’re too sophisticated wearing a grown-up brand or you don’t feel like you have to be 14 years old with those kind of perky little bottoms!

What is a day in the life of Collette Dinnigan?

Oh my god, well now it’s a bit different. The last three or four months, it has been seven days a week doing the museum [exhibition] as well as doing the lingerie [collection], and also I just did some interiors for a hotel, Bannisters down in Mollymook [on the NSW South Coast] – the haute couture penthouse suites. It was great. I love interiors. And my book [Obsessive Creative] went on sale in May/June in America as well. It has actually been extremely busy – busier than doing Paris [runway shows]!

Tell me about your involvement with the exhibition Collette Dinnigan: Unlaced.

I have been curating with Glynis [Jones of the Powerhouse], we’ve got more than a thousand pieces of clothing in our collection. It was a selection process of what they wanted in the exhibition and what I also envisaged. The museum wanted things that were much more, I guess, dictated by monumental milestones in my career, but I was very hands-on and it’s not just a collection of clothes. It’s also about my inspirations. It takes people on a journey. I wanted it to be younger. So that’s why we created the catwalk, which is a live catwalk we filmed. So you could see the clothes standing there, as well as the girls walking to you.

How do you feel when you look through all your archives?

Do you have a favourite piece in your archives?

I think my last collection. Even though it’s pretty recent – a year and a half ago – most of those pieces, to me, stand the test time.

Was it a tough decision to scale back your business?

It was really emotional for me and I made that decision on my own because I felt like I didn’t want [my husband] Bradley [Cocks] to be involved or ever have any responsibility talking me into it. But I felt quite liberated because I felt I wasn’t pushed into a financial decision. I felt I had achieved a lot in my career. I think when my book came out, that’s what made me think, “I’ve done all of this.” I had so many other things like interiors I wanted to do and just spending time with the children and being there and able to do things rather than always, every school holidays in January, I’m in the studio making the next collection, or September holidays I’m always off to Paris [for the shows]. So that was kind of really the deciding line.

You said that you scaled back to have time with the family. Are you able to get more quality time with them now?

You know what I do is – I’m still very busy but I get to control the time. I can go down to a farm for the holidays and we’re all there together.

Do you ever miss creating those beautiful gowns and wedding dresses?

No! I feel like, working with the museum, I’ve been doing collection after collection because I’ve been bringing them out of the boxes and restyling and putting them on the mannequins. I feel like I’m living fashion more than I ever have before because it has been in front of me for a whole year.

Do you still get many people requesting you to design their wedding dress?

Do you ever make any exceptions?

No, no. Because when you stop, you stop everything. You need that infrastructure. I still have my studio set up with sewing machines and fitting tables and things, but you either do it all or you don’t do any.

Your daughter will have an amazing wardrobe when she grows up!

Oh yes, but she is so disinterested. Getting her to wear a skirt to the opening night of the exhibition, oh my god! She is more interested in horses. It’s like the cobbler son doesn’t have any shoes!

I definitely think making the decision to show in Paris was something that drove the business. Also, The Victoria & Albert: doing the show there in 2000 and opening my store in London, I think that was a huge achievement. I had the store there for 14 years. I guess being acknowledged by some of the big fashion luminaries and editors like Glenda Baileys and Anna Wintours, I think that’s sort of a huge testament to the brand. I think those are my career milestones.

Have you seen the industry change over all these years?

Oh my god [yes]. I can remember shows in Paris; you had to be accredited by Shaun Alexander if you’re a photographer. You had to have an official pass. You weren’t allowed to release any images for three months until Vogue and all the publications came out because they were the first. Then, after that, that’s when you release the collection into store. Whereas now, there are live streaming shows. They’ve already made the collections. There’s no surprise, there is no kind of anticipation of what’s happening because you see everything live. There’s so much at once. It’s so commercialised.

We’re usually at the farm in my vegetable garden. I cook a lot or just go along the beach – just opposite end of the spectrum [to fashion]. Not at all city living. It’s very much about country and beach and family.
BITE SIZE
WE WENT TO Alimentari cafe, Paddington.

I WORE a Bec & Bridge jacket and Skin and Threads jeans.

Collette Dinnigan for The Australian Ballet I have recently fallen in love with the Collette Dinnigan for the Australian Ballet collection. The range is currently available at Target and is every little ballerina’s dream! It’s tutus and sequins and tulle aplenty and is absolutely gorgeous. If you have a little girl you must check it out. I know I can’t wait to get Sophia into some of the pieces. I recently spoke to designer Collette Dinnigan about creating such a dreamy collection…

How did you get involved with designing a collection for the Australian Ballet?
My friend Sarah Murdoch (who is on the board of directors of the Australian Ballet) asked if I had any ideas on ways to take the ballet to a wider, younger audience while raising money to fund an education program.

What’s the design process like for a collaboration such as this?
My designing process is the same but it is fun to have the interaction with others and be able to talk about ideas and make them happen as part of a team.

You were inspired by the Nutcracker for this collection – what’s your favourite ballet?
I love the Nutcracker as I think it’s such a universal ballet that appeals to all. I just saw La Bayadere and was blown away by the beauty of the design and costumes as well as the dancers. Collette’s favourite piece in the collection

What’s your fave piece in the collection?
The little sequin tutu as I think it’s every little girl’s dream to wear sequins and tulle.

What is currently inspiring you as a designer?
My summer garden filled with blossoms in all shades of pinks and hues of lilac, the light in the country and the sun as it is rising against the horizon. I guess everything to do with nature. It never ceases to amaze me how beautiful the country is.

What’s your favourite part of the design process?
The very beginning when I have time just to imagine.

What’s the most challenging part?
Keeping focused and making sure my edit is right and the direction is maintained.

What are some things you do at the start of designing each new collection?
Housekeeping – reorganising the office, updating my contacts, filing, it’s all a distraction as once I am immersed it’s a creative journey that I can’t stop and evolves and changes by the minute (or so it feels).

Who would you love to see wearing one of your designs and why?
Alexa Chung. I love her edgy, girly fashion confidence.

What are some of your favourite daily rituals?
Lemon and honey when I wake, then always a hot bath before I need to organise the family for school. A good coffee – I don’t care how far I have to go. And at the end of the day a good glass of burgundy!

If you could collaborate with anyone on a collection, who would it be and why?
I would love the opportunity to work with Tim Burton in his fantasy filled world. I think he is a genius in capturing a world we dream of as children but with an adult’s humour and sense of escapism.

What do you think of Collette Dinnigan’s collection for Target? 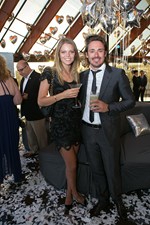 The Silver Party has been synonymous over the years as one of the most exclusive charity events on the social calendar and once again, it didn’t disappoint!

END_OF_DOCUMENT_TOKEN_TO_BE_REPLACED This week David Jones launched its Autumn Winter 2014 collections with a dramatic presentation on the seventh floor of the David Jones Elizabeth Street Store. Over 300 guests were transported through a magical garden as the entire space was filled with stunning floral arrangements that were created by florist Saskia Havekis from Grandiflora. Over 50 Camellia Sasanqua trees were used to create the atmosphere along with ivy, twisted winter branches and deep cobalt blue hydrangea stems as well as beautiful giant gold moths that settling onto sprouting mushrooms. A front row powerhouse included Great Gatsby star Elizabeth Debicki. Oscar nominee and four time nominated Emmy winner Rachel Griffiths and the stunning mum-to-be Megan Gale.

END_OF_DOCUMENT_TOKEN_TO_BE_REPLACED Here are the latest campaign images and a short film on the new Collette by Collette Dinnigan spring summer 2013 collection. The collection is influenced by the Caribbean and the perfect island getaway. Collette’s designs in this diffusion label signify her appeal of feminine silhouettes and a kaleidoscope of colour and prints. The collection will be in store August – October, in time for summer! Collette Dinnigan showcased her 2014 Resort collection in New York this week. The collection was inspired by the “laid-back luxe” of the late sixties with cotton tennis dresses, high waisted pants and broderie anglaise detailing. 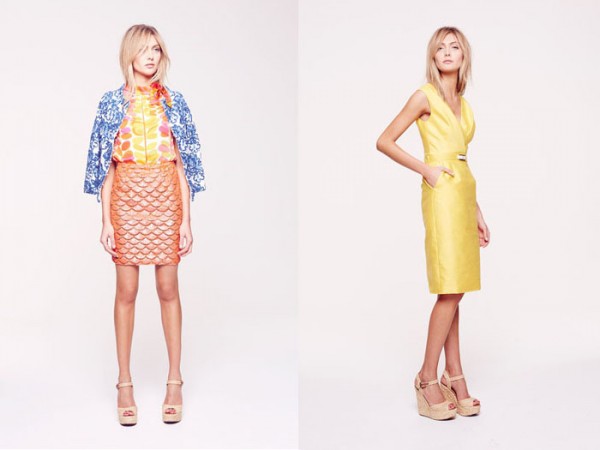 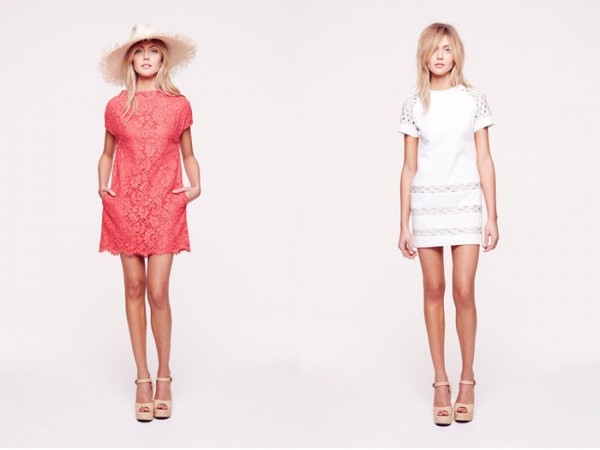 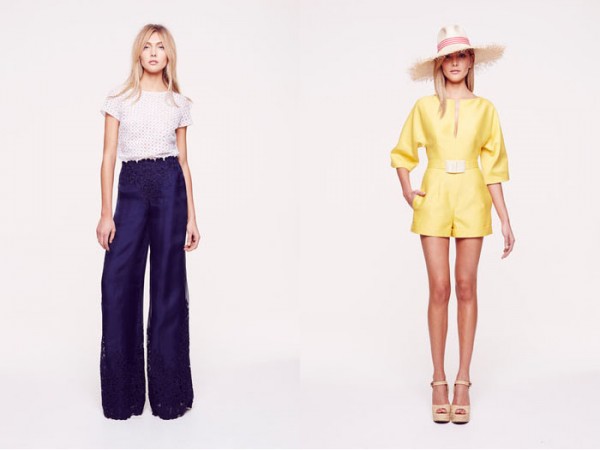