Having lunch with Kris Smith.

Television presenter, model and former professional athlete Kris Smith is originally from Manchester, England, but hung up the football boots to move to Australia in 2008 with then-partner Dannii Minogue. The power couple had a son, Ethan, in 2010 but split almost two years later. Smith is the co-host of Channel 7’s national afternoon program The Daily Edition and a Myer ambassador alongside Jennifer Hawkins. I caught up with Smith, 35, to chat about his career, fatherhood and those engagement rumours with girlfriend Maddy King.

What are you up to?

This month I’m shooting the Myer spring-summer [campaign] so I’m back in the gym and working out, getting ready for that. The Daily Edition is going from strength to strength. And I’m trying to head back to Melbourne as much as possible to see Ethan.

You have a great job!

I do. It was only this morning I sat down with [girlfriend] Mads and sometimes things just flash right before your eyes and you realise just how lucky you are. The surroundings I’m in – living in a beautiful country with a great girl and two amazing employers – I’m living the dream. I am constantly pinching myself.

When you were playing league in England, did you ever think that you would become a household name in Australia?

No, never. It’s really weird how I ended up in Australia. I was under the impression – like a lot of English people – there were kangaroos skipping down the street and everything was wilderness and outback.

Do you call Australia home now? Did you ever think you would become a TV presenter and model?

The modelling thing I never thought. I still don’t think I’m too good at it! If you look at Zoolander, he has got one look and I think I’m a little bit like that. But with the TV show, I’ve always been interested in live TV. I’m still learning everything but Channel 7 has been extremely patient and extremely kind in giving me an opportunity. There have been one or two queries [from the viewers] about my accent and the ability to understand me at times! Especially when I get excited about things, I speak quite quickly.

It’s Mother’s Day – do you have any plans? Kris Smith with Dannii Minogue and their son Ethan.

What has Ethan given his mum today?

He sent his mum a card and a beautiful bunch of flowers. As he does each year. He sends on both English Mother’s Day and the Australian Mother’s Day because he is half English, of course. So you celebrate both.

Yeah. She’s got a great son. He is a very good boy. He tries to write his own cards. So he is amazing.

How do you and Dannii manage co-parenting when you both have such busy schedules and live in different states?

It’s difficult. He is based down in Melbourne. He is going to be schooled down there. His pre-school is down in Melbourne so it is really difficult. But we have internet, Facetime [and] Skype and I just try and get down as many weekends as possible. I fly down and take him for the weekend and go do fun boy stuff. We’ll play golf or go to zoo or play football.

So do you think Ethan will follow in your footsteps with the football side of things or has he got the musical side?

It’s a bit hard to tell yet. He does love kicking the football around. Billy Slater is a very close friend of mine and we take our kids in the park and kick the football around. I always love to involve him in as many sports as possible, but I think if I had to say one of them I think golf would be his calling. He just loves it. He would not let you sit down when his golf club is around. You caused headlines when you and Maddy wore matching rings. Is there truth to these rumours that you are engaged?

Oh! No, we’re not engaged. It has been spoken about. She is an amazing girl. She is incredible with Ethan. She is extremely patient with me. Which is always a good trait. She understands my busy work schedule and never gets on at me about that. If anything, she supports everything that I do. So she is a definite keeper [but] we are in no immediate rush. But, yeah, it’s not off the cards.

You seem very happy.
She is a great girl. She is very down to earth. What you see is what you get. I like that. I don’t like having to guess who you’re with or what you’re with. It’s nice when you wear your heart on your sleeve like that.

Where do see yourself in five year’s time?
See now, if you would have asked me that five years ago I would never say here – so the answer is to never make plans, just roll with it. This is an incredible wave that I’m riding right now and I don’t ever want this to end.

WE WENT TO Hinky Dinks, Darlinghurst

WE DRANK a Woodford Reserve Whisky Sour and a virgin Milk Sunday. 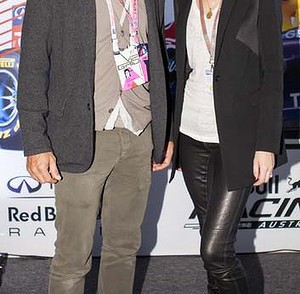 It was golden @chaumetofficial touches for Golden

Summer soirée 🌸 when @nadiafairfax and @camill

PREMIERE NIGHT 🍿 getting excited for #GucciFest