Sigrid Thornton and I catch up at Kensington Street Social

Sigrid Thornton is one of Australia’s most loved actresses. For more than 40 years she has had a career spanning film, theatre and television in an array of roles. She is now in Fiddler on the Roof playing Golde, the wife of lead character Tevye (Anthony Warlow). Thornton, 57, gives me advice on acting, the secrets to success and her highlights and challenges of a career in the spotlight.

What aspect of Fiddler on the Roof have you enjoyed the most?

I suppose the challenge of musical theatre, which is something of a foreign land for me … Coming in and singing, dancing and working with an orchestra, which is such a joyful thing. It’s relatively new [to me], so it’s exciting.

I always prepare in different ways. With this, I wanted to know a little bit about the background of the actual piece. But, of course, singing and dancing requires a different kind of level of application for me because it’s new.

Do you prefer stage, film or television?

I don’t prefer one, I love the diversity of my work and the fact that I’ve managed to be lucky enough to cover all of those genres and forms. I like changing it up. I enjoy the fact that, as an actor, you can move between one medium and another.

Is each genre different [to work in]?

Yes. There is one set of aspects that’s the same regardless, and that is, the way that you apply yourself to the script as an actor, which is essentially trying to find the truth in the character, trying to find the correlation between the character and you, if that makes any sense. In television, you’ve got a huge advantage of being able to tell a story over a longer period of time. With film, it’s a faster storytelling mode but the shots are very big, so your face is very big. You tell the story slightly differently. With theatre, it’s more opened out, it’s more expansive but, ideally, no less truthful.

What has been your most challenging role you’ve ever played?

Why was it so challenging?

It just is one of the most challenging roles and one of the most exciting and fascinating roles. It’s a perfectly constructed three-hour play, you never leave the stage. There’s a huge amount of words and it involves understanding the dark journey of a character descending into madness. There is a great deal of comedy in the play and it’s also run through with monologues, just as Shakespeare is. There are – for Blanche, there are a number of monologues throughout the play, all of which had to have a different tone and level to them that tells a different aspect of the story.

What has been your biggest highlight in your career?

[Playing Blanche] would be one because of the sort of magnitude of the challenge I suppose. There have been so many. I mean, I really have had a very fortunate career. I’ve been given the opportunity to have lots of good runs in the paddock. I’ve been given a lot of opportunities to explore the boundaries of my skills by breaking away from a particular perception with a different role, such as SeaChange, which came at a time when I really needed to sort of be understood in a different kind of way.

You’ve had long and successful career. What is the secret to your success?

I don’t think there is a secret. I think I’ve worked hard and steadily and I’ve always sort of been in it for the long journey. I’ve kept developing my work and my approach to my work with doing classes … It’s a bit corny but if you stop learning you really probably have to stop acting, I think, because it’s part of the job.

What’s the best advice you have been given?

Not to take yourself too seriously in this business. I think it’s something that I’ve been lucky enough to avoid, partly through having started so young, with parents who forced in me a respect for the actual work of the business that it’s actually a job. And also in part because of my own family, who would never allow me to be anything other than myself. So that’s my good fortune, I think.

What advice would you give to someone starting out in acting?

I’d probably ask a question before I gave advice. I’d probably ask, “How much do you really want this?” Because it’s not an easy choice. For me, the choice was almost made for me not by somebody else but by an internal drive. I was probably saying, “I wanted to be an actor” at about seven. And I just pursued it and there was no particular family reason why I should have chosen it. But now, the world is much more consumed with speed of communication and that has affected the reasons, I think, why people get into acting in the first place … And unless you really want it enough and you need it as a creative outlet in your life, I wouldn’t necessarily advise you to take it on. And a lot of people do find that it’s just not for them, when they have difficult periods.

What has been your biggest challenge in your career?

Trying to balance my career with my family life. It has always been a fixation for me, to try and get that balance right, and I don’t know that it’s actually possible to have the balance right all the time for a working parent. I think any mother or father, any parent can see that one day it will feel like it’s working really well and then, the next day, it all goes to shit basically. We want to do both things well. So I suppose that has been the biggest challenge for me: trying to understand how to get that right, from one day to the next.

If you hadn’t become an actor, what would you have done?

Most actors say psychotherapist … because [actors are] interested in what makes people tick ….. That would have been pretty fascinating.

What do you do in your down time, when you’re not working?

I love to catch up with people. We have a place outside town, so I like to go there and walk in nature with my dog and my husband. I should’ve put them in the other order, shouldn’t I, really? [Laughs] I like going to the movies, reading and breakfast in bed. I’m one of the breakfast-in-bed persons. I like spending days not getting out of my pyjamas. Not that I really am a pyjamas person. I like pyjamas for spending the day in, rather than going to bed in!

Fiddler on the Roof plays in Sydney’s Capitol Theatre until May 8; tickets from $69.90.

WE WENT TO Kensington Street Social 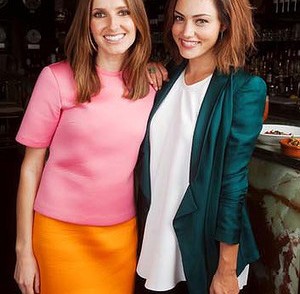 Reader question: How do I wear oversized shorts?

I’ll take any excuse to wear a great suit ☺️