Jessica Kahawaty and I at Catalina Rose Bay

Jessica Kahawaty was born and raised in Sydney and now lives in Dubai, where she is a model and was the host of Arabic TV show Project Runway Middle East, season one. She won Miss World Australia in 2012, has worked with luxury brands including Louis Vuitton and Rolls-Royce and has more than 300,000 followers on Instagram. Kahawaty, 28, talks to me about her rise to fame, her biggest  “pinch me” moment and what most people find surprising about her.

You grew up in Sydney. How would you describe your childhood?

I had a great childhood growing up in Castle Hill. I absolutely loved the suburbs because they were so relaxing and I went to a great school as well not too far. My parents always encouraged us to travel and practice the languages we speak so we found ourselves in Europe and Beirut a lot during our summer holidays.

You have such a striking look. What is your heritage?

My mother is olive skinned and has very light green eyes and brown hair. She is Lebanese. My father has white skin and black hair – his ancestors are a mix of Armenian, Lebanese and Syrian. A bit of a cocktail [mix]!

How did you get into modeling?

I started modeling when I was 14. My mother was a model and was rehearsing for a show when I got scouted. I had to stop for a few years because I had a very awkward period with braces and bad skin [laughs], then [I] started again at 18. What did it mean to be crowned Miss World Australia in 2012 and how did winning impact your career?

I always saw Miss Australia’s role as an ambassador to her country as well as a spokesperson for regional and international philanthropic causes. I loved that their aim was always to choose someone well rounded who can speak and bring light issues that matter. It definitely impacted my career positively but the title lasts for a year so it definitely took a lot of hard work and perseverance to have a long lasting career [after].

You were born and raised in Sydney but have become a superstar in the Middle East, how did that come about?

News travels fast! The Middle East was very embracing of the fact that an Australian girl with part of her heritage being from there had won Miss Australia and was a runner up in Miss World. They were so proud of that fact and it was an opportunity for me to bridge a gap between East and West. I was pretty lucky that I spoke Arabic and English and was able to translate all my experience and upbringing into the Arabic culture and vice versa without a language barrier. I found Dubai to be such an amazing base for all the things I wanted to do in the Middle East, Paris, London and New York.

What was it like to land the prime-time role as host of Project Runway Middle East?

I had always looked up to Heidi Klum as a successful businesswoman and entrepreneur who was one of the first to combine the modeling, TV and fashion worlds together. The show was another point in my career that I am so proud of doing especially considering Arabic isn’t my first language and I had no TV experience at all. It was an incredible experience to have the likes of Carine Roitfeld, Toni Garrn, Milla Jovovich and many other international guests on the show and to hear their perspectives on emerging Middle Eastern talents. How did that impact your career?

Television presents immense exposure and is such a traditional form of media that takes you into the living room and private spaces of people and families. Becoming a household name definitely presents new opportunities, as well as challenges!

How is life different in the Middle East?

Life is so dynamic and fast-paced there; I barely have [any] time to myself. There’s always something going on and Dubai is a melting pot for a lot of expats, tourists and visitors. There’s a lot more travel (almost every 2 weeks) and the activities differ a little from Sydney… You spend a lot of time outdoors in Australia whereas in Dubai it’s 50/50…

You’ve been touted as Dubai’s ‘It Girl’. What is that like?

It’s an honour every time I hear that. I think it’s just really important to present whatever country or region you are in, in the best light possible. I love that I was able to put a mark specifically in Dubai.

What are some of the perks of being a superstar in a place like Dubai?

I love flying in and out of Dubai… I’ve been to the most picturesque British countryside with Rolls-Royce but also experienced the hub of London with other brands. I’ve seen Paris during fashion week but I’ve also shot in a forest and on the side of lakes outside of Paris.

What has been your biggest “pinch-me” moment?

This would definitely be riding a bike with IWC watches for the Laureus event in the South of France with Olympic champions and athletes like Nico Rosberg, Fabian Cancellara and many others. We rode from Monaco to France and ended in Italy. The pinch-me part was the company I was with and the fact that I had never ridden a bike before (super overprotective parents who thought I was too clumsy [laughs] and [I] managed to cross borders!

What’s it like being recognised everywhere you go in the Middle East?

… It’s humbling and grounding when they come up with such loving words especially when it’s from young girls.

What’s the most exciting campaign you have ever worked on?

There have been so many. I loved the mini IWC campaign earlier this year with Lewis Hamilton. I also loved the cover shoot I recently shot for Harper’s Bazaar Arabia in the desert. The most exciting and memorable I would say is shooting a campaign with Oscar winner Adrien Brody in Abu Dhabi where I was chasing the guy who stole his suitcase in a Rolls-Royce!

You are a superstar in the Middle East, yet you remain largely unknown in your home country. What is that like?

I put so much focus overseas in Europe and the Middle East in the last three years to create so much value to bring home. Geographically, Australia is quite far and you have to be physically present here. This is why I am aiming to spend a bit more time in Australia whilst continuing all my endeavours overseas.

What did you miss most about home?

I definitely miss the nature, people and food! All my close friends and family are in Australia and I love the outdoors so I miss the beach, the beautiful sky and definitely the best food in the world!

Do you have plans to spend more time here?

Definitely! I was coming back two to three times a year just to visit my family and friends – no work, just downtime. But I’m aiming to try and come back every three to four months – also for some chill time but to work with some of my favourite brands here.

You have a finance and law degree – is that helpful for the work you do?

I specialised in Human Rights Law and all the subjects I ever studied revolved around humans and international rights. I love that aspect of the law and I feel like it translates into the charity work I do. It’s definitely a great complement to the industry that I am in.

What human rights issues are you most passionate about?

We all have a soft spot for something. For me, it’s children’s rights and displaced children with no access to education. If only we can provide this basic human right and need to millions, we would be able to pave a golden path for the next generation.

You speak English, Arabic and French fluently; did you grow up being multilingual?

My parents sent us to a French school in Australia for a few years where we spoke English in the playground and Arabic at home! It wasn’t easy but they wanted us to be fluent so they refused to speak to us in any other language inside the house. Traveling abroad every year also helped because you were forced to speak the local language. I’m currently learning Italian and find that I improve drastically when I travel to Rome for work.

We go out on the boat a lot in Dubai or I spend time with my friends at the beach or doing some sort of activity like wakeboarding. I like watching TV series and movies so we’ll do that as well if it’s too hot to go outside.

I definitely see myself doing what I’m doing on an even bigger scale and creating a platform that can help bridge this industry together (it’s all I can say for now). I would also love to have a family of my own. I’m very close to my parents and would love to have that relationship with my children.

What is something people would find surprising to know about you?

I have never tried coffee in my life! In an industry that’s so fast-paced and extremely long working hours as well as international flights, people are usually shocked as to how I am full of energy. I would like to try it one day though as I’m usually left out when all my girlfriends are drinking coffee and I’m slowly sipping a juice. 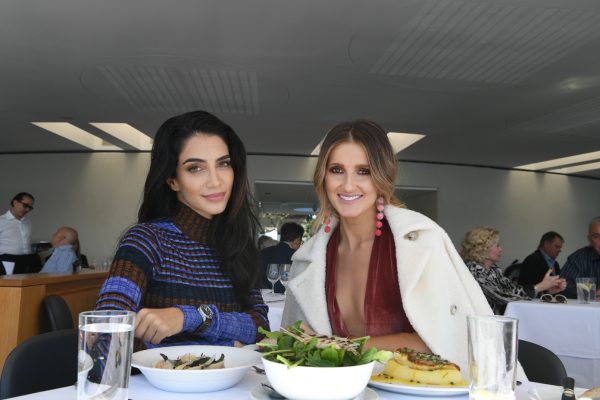 We went to Catalina Rosebay

What I Wore: Viktoria & Woods

Bored of the white sneaker? Here’s the answer