Behind the scenes on my Grace magazine cover shoot I am so thrilled and honoured to share the news that I’m covering the new issue of Grace magazine with my family.

I’ve known Georgie Abay, the editor of the parenting website The Grace Tales since her days at Vogue and have been a long time fan of her site which is all about motherhood, stylish mothers and all things children and is a great website for mums. Recently Georgie launched an online magazine called Grace which I absolutely loved reading so I felt very honoured when she asked my sister-in-law Hoda and I to appear on the cover of the second issue with our children.

It was a Christmas themed shoot that took place in a studio in Sydney’s Waterloo. I always love seeing the outfits the stylist has pulled for a shoot and this time around we got to wear some fabulous outfits, in really bright colours and a handful of metallics to reflect the fact it was an issue celebrating the festive season. It was a nice way to mark the start of this great time of year.

Sophia was particularly excited about the shoot as she was able to “go to work with mummy”. Photo shoots are long days so by the end of it I think her excitement had waned slightly and going to work with mummy was no longer quite so fun but she loved spending time with her cousins, Rose and William. As with most little girls I think her favourite part of the day was playing dress ups. As soon as she walked in she was trying on shoes and trying on different dresses and she just wanted to be in everything Rose was wearing so a lot of the shots they’re wearing the same thing. It was an honour to be asked to be in the shoot with Hoda and the kids and we had such an unbelievably fun day shooting it. I hope you like the end result!

To check out the story head to The Grace Tales. With my sister-in-law, Hoda 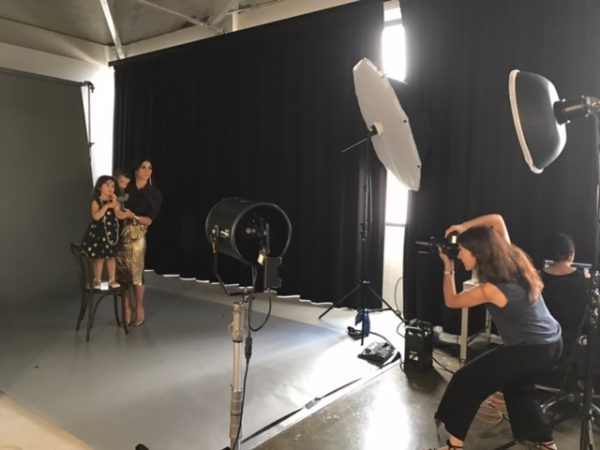 Hoda and my niece Rose and nephew William on set Sophia inspecting the accessories for the shoot Selfie time with Hoda and Rose If there’s one thing you need on a shoot it’s coffee! Hoda getting her hair styled

The online shopping destination you need to bookmark now

What to buy from the Shopbop sale

What I Wore: Denim Daze

My tips for sale shopping