What I Wore: Urban Flower Wearing a work of art like this Maticevski dress makes me appreciate the opportunity to do so once again. I love my loungewear through and through but being able to wear a piece like this is always such a highlight. The detail on this dress is beyond. Look at the fabric up close and it’s got a beautiful textured finish that to resembles overlapping flower petals. Which I think ties in beautifully to the the flower-like folds of the dress. It’s a definite statement feature and something that elevates this dress into something special.

With a dress like this was about striking the right balance with my accoutrements. I didn’t want to do too much otherwise it would all just be a bit overwhelming but I also didn’t want to look like it was too pared back and that there was something missing. So I went for a classic monochrome colour palette and opted for my black Bottega Veneta heels. It’s an interesting silhouette, but quite minimalist so it wasn’t competing with the dress. I went for a white mini bag to tie into the colour of the dress, but with a gold accent colour to added a luxe touch. To finish it off, I can’t think of a much better pairing with this dress than stunning jewellery. Working with Chaumet has allowed to wear some amazing pieces from their collection. For this outfit, I decided to layer silver and rose gold. Both striking colours that complement each other and play against the white of the dress. Plus who doesn’t love a little extra sparkle?

What I Wore: On the Edge While I love soft, feminine looks, there’s also fun to be had in dabbling with edgier styles. Especially when it comes to outfits that are made for after dark dressing. This duo by Bec and Bridge is big and bold. The top with its crossover straps and open back makes a statement, while the ribbed midi skirt offers some balance with its slightly more conservative feel. I often like to choose one major focal point with any look and in this instance I wanted the top to take centre stage.

Whenever I’m looking for accent pieces to pair with black I always revert to gold. There’s something so sleek and sophisticated about black and gold and both work beautifully in contrast with each other. I paired this look with drop earrings by Aje to add a dusting of glam. While my ever so mini bag by Oroton with its gold accent adds another gilded element to my outfit. To finish things off if was all about my leather Bottega Veneta sandals. The delicate straps are in keeping with the vibe of the top, which ties together the look nicely.

What I Wore: Colour Pop When it comes to my wardrobe I generally tend to favour lots of neutrals and muted tones. I gravitate towards shades that can easily be worked back with the rest of my wardrobe seamlessly but every so often I’ll want to wear a vibrant hue. This navy jumpsuit has a classic feel from the silhouette to the colour, but for a day look it was calling out to be paired with a bold pop of colour to give it a more casual feel. A simple tote is one of my go-tos when I’m out and about and in a bright red it gave my ensemble a fun touch. When working with such a intense colour, I wanted to let it take centre stage so I chose simple accessories. My favourite white Gucci sneakers and black sunglasses seemed the right fit whilst the addition of a pair of drop earrings help to lift the entire ensemble. When it comes to days where I’m out and about, I always like to make a point to turn a casual off duty outfit into something with a little polish without sacrificing comfort and in this instance, a little colour really went a long way. 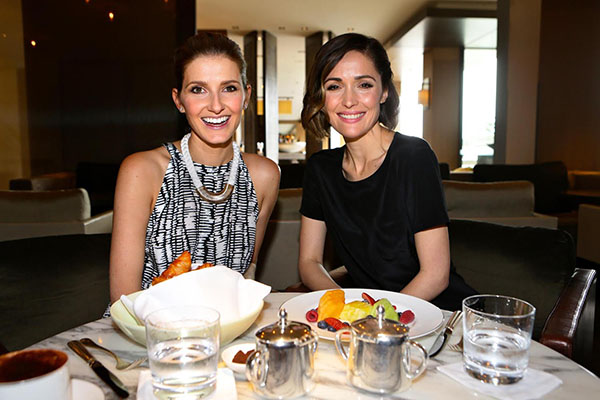 Rose Byrne is known for her work on both the big and small screens, from the films X-Men: First Class, Troy and Bridesmaids to the TV series Damages, for which she was twice nominated for a Golden Globe. While back in Australia this month as ambassador for Oroton she told Kate Waterhouse about working in theatre, finding comedy hard and hoping to be in a David Lynch film.

Well, I’m doing a play [You Can’t Take It With You] on Broadway at the Longacre Theatre… which is a beautiful theatre. We’ve been running now for just over two months.

Do you enjoy stage theatre?

I do. I haven’t done a play for years since the Sydney Theatre Company, when I was in my early 20s. It’s thrilling. The first few weeks of previews were pretty nerve wracking. I was finding my feet and getting used to the adrenaline. I was longing to do a play for a really long time… It’s just such a different medium for actors and it’s in a way harder. But it’s thrilling. There’s nothing like the feeling of a live audience.

Do you prefer theatre to film?

No, I don’t. I feel very grateful to do both. Years ago I thought my dream would be to do a play on Broadway – when I started acting in New York when I was like 19. So it’s communion for me: you go in, you get ready and you have your dressing room, you do your little warm up, people come. Theatre really is a ritual. And the tradition of it is so rich.

You’ve had huge success in comedic roles. Is that something you always wanted to pursue or did you fall into it?

I had done more things like Damages and Troy, which were far more serious, and I longed to do something with a bit more levity. But it’s hard – people see you in a certain way. So I was very lucky that Judd Apatow and Nick Stoller cast me in Get Him to the Greek. They really gave me my break. But I think comedy is really hard… It’s serious business, making people laugh!

What genre do you prefer?

Like most actors I feel like diversity is so great … to be able to able to flex different muscles… I think the actors I admire are the chameleons.

Who are some of the actors you admire?

Amy Adams is incredible. She’s really diverse and just wonderful in everything. And I’ve always admired all of the actors who have come from Australia, like Toni Collette or Cate Blanchett or Nicole [Kidman]. I find Naomi [Watts] really very inspiring to watch. I’m very proud to call them countrymen, I suppose.

Bridesmaids was such a huge hit. Was that a lot of fun to work on?

It was. It’s such a pleasure. As a woman, you never get to work with other women… There’s usually one role for the woman in the film. It’s so rare to work with so many women, so it was so fun. I remember, when we were making it we, by no means [was there] thought it was going to become this beloved kind of big hit… It was like a small little comedy.

You have fans around the world. What film do they resonate the most with?

It’s pretty tragic, but Star Wars is what I get the most fan mail from. That film is just in the fabric of society, it’s amazing. I have a tiny part but [the film] just has such a huge cultural influence.

Tell me about your role with Oroton.

It’s wonderful. I was thrilled to be asked to be the face of the brand. I thought it was a great fit. I love the heritage of the brand – which I was really drawn to, being Australian and having grown up with it – and the kind of revamping they were doing to it and really emphasising the relaxed glamour of it. What are your wardrobe essentials?

A Oroton backpack [pictured], a great pair of jeans, a summer dress, a hat – because of the sun. As Australians we’re always equipped with several. And then a great winter coat for New York, because the winters there are quite brutal. You want to look chic, even if it’s cold. 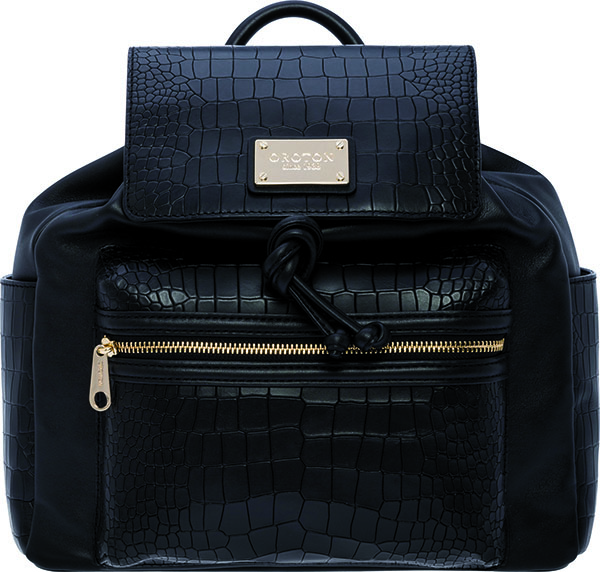 Oh sure. I mean I think, like every Australian, you plan to. Well, I do, anyway. My family is here so it’s my emotional home and it’s beautiful. My greatest treasure is my Australian passport.

You must get asked all the time but what was it like to kiss Brad Pitt?

That’s an old one. I haven’t been asked that for a while. It was a tough day, Kate, tough day at the office – very tough! [Laughs.]

I finish the play early in the New Year. And [then] I’m not sure; I’m waiting to see. But I’ve gotAnnie [starring Jamie Foxx and Cameron Diaz] coming out at Christmas.

I’d love to be in David Lynch movie. I’ve always adored his films and I just think I’m kind of his serial fan. I just love him. That would be a really incredible thing.

BITE SIZE
WE WENT TO the Park Hyatt, The Rocks.
WE ATE a fruit platter and a selection of pastries.
WE DRANK herbal tea and a cappuccino
ROSE WORE Oroton leather skirt and T-shirt.
I WORE Saba dress and Topshop necklace.